I n January 2021, social media as well as mainstream media was awash with news that Elon Musk, the CEO of SpaceX and Tesla had surpassed Jeff Bezos to be ranked as the wealthiest man on earth. For decades, that position oscillated between two people, Bill Gates and Warren Buffet.

Musk was perhaps the unlikeliest of them all. Reading his biography, one learns one thing about him: Guts. When he poured all the money that he got from selling Paypal into his next project, he escaped bankruptcy by mere margins. Musk has so much to write about.

These days when we teach people about vision and goals, people who think that they are daring and are really dreaming end up with “BHAGs” (Big, Hairy, Audacious Goals) that are financial in nature:

“I am happy now that I am a millionaire in dollars”

“I am happy now that my networth is ___ Millions”

Well folks, there is absolutely nothing wrong with these goals. However, someone said that success leaves clues. What are the clues for the guys aspiring to be millionaires and billionaires? It is simple. The clues are the people who are already there.

Here is the list as of January 2021 of the top 10 wealthiest people on earth:

What Makes them Tick?

When you take some time to study any one of these guys, you will learn two critical things. Those are the crux of my post today.

1. Wealth Is a By Product

If you study these people, read their books, listen to them speak, watch their interview and so on, you will realize that they never set out to be millionaires. You will be so hard pressed to find a single one of them who had a goal to become wealthy or to become a millionaire.

In fact, when Elon Musk was tagged on twitter and told that he was now the richest man on earth, his response was epic. He did that in two tweets. 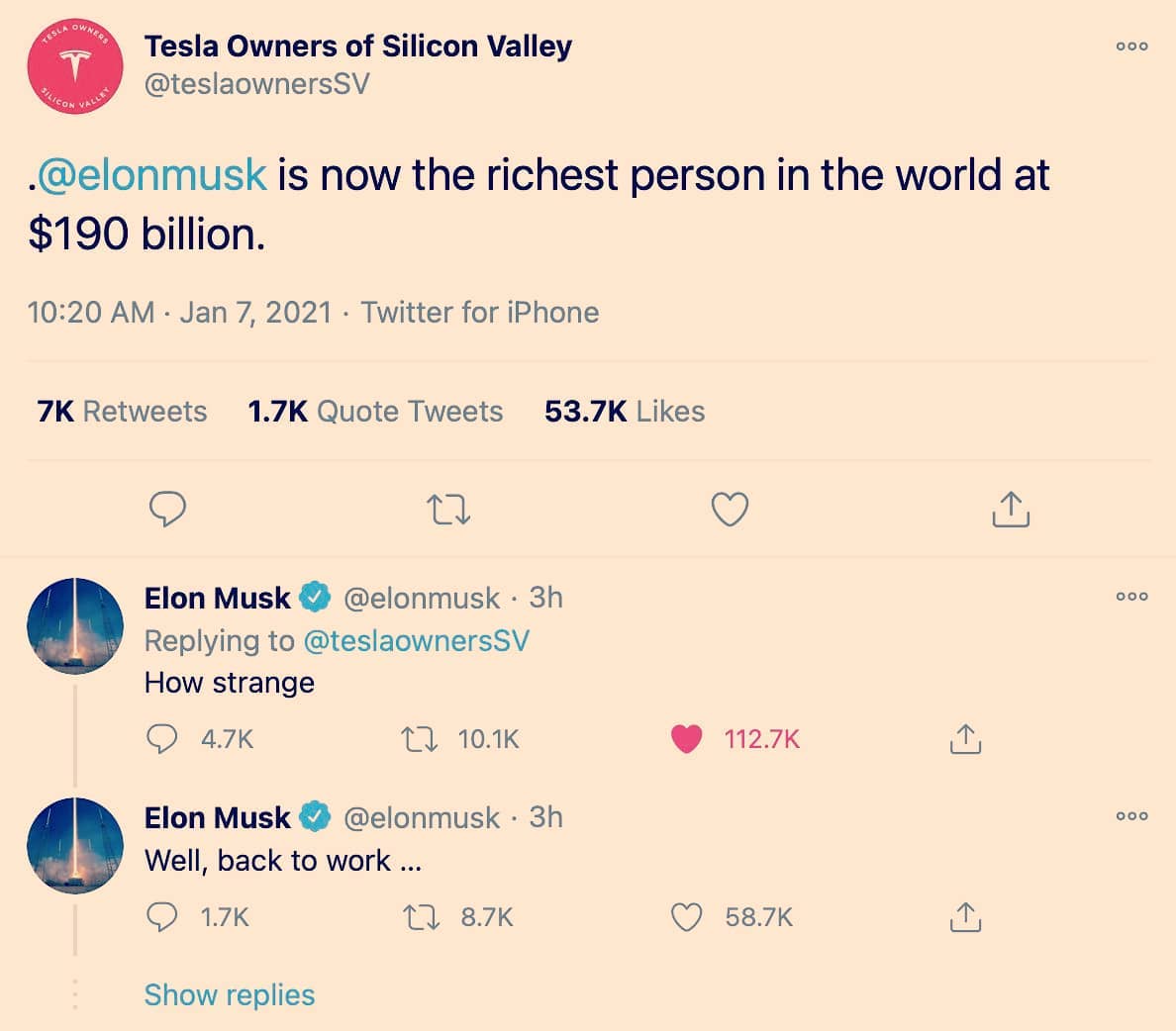 Question: What would you do if you discovered that you are the richest man on earth? Your behavior will tell the world where your focus is. Was your focus on the money or on making a difference?

Big time wealthy guys (in a legitimate way) seldom focus on the money. The Chairman and founder of Equity Bank in East Africa Mr. James Mwangi also narrated of how he found out that he had become a millionaire. To him, nothing had changed. Work still had to be done. Challenges had to be sorted.

Money is not First

The point I am raising is that setting a goal to be millionaire or a billionaire doesn’t seem to be the thing to do in order to become wealthy. We learn this from Viktor E Frankl when he said the following:

“Don’t aim at success. The more you aim at it and make it a target, the more you are going to miss it. For success, like happiness, cannot be pursued; it must ensue, and it only does so as the unintended side effect of one’s personal dedication to a cause greater than oneself.”

Did you see that? “It only does so as the unintended side effect of one’s personal dedication to a cause greater than oneself”

Look at the list of all these guys. Can you say that for them success was the unintended side effect to a greater cause? I think so.

Bill Gates? Each home to have a computer running windows. That was his goal. Not to become a millionaire. Unintentionally, he did become one. The message is simple. Find a place where you can add value to this world. The more you are dedicated and focused in adding value to the world, the greater the value and the greater the number that are helped, the more you are wealthy.

Money Is Not The Ultimate End

I have read a lot about the wealthy people and their relationship with money. They seem to realize that money is not the ultimate end of life. In 2014, Elon Musk when interviewed said he did not know how rich he was, how much he was worth.

It is not like he wakes up in the morning to find out how much money he has. It is never about the money.

“It is not as if there is a pile of cash somewhere. It’s really just that I have a certain number of votes in Tesla and SpaceX, and SolarCity, and the marketplace has value on those votes”

In an interview one day, Apple founder Steve Jobs said, “Money is not one of those enlightened things that ever happened to me…” For him, work and passion was the revelation of his life. Not money.

As the new decade begins, let the money aspect of your life be the unintended side effect of pursuing something greater than yourself. I believe that’s the way to go. So do not stress if you do not see it a possibility. Only look at what cause you are pursuing today.

In the end it is about value, passion, taking massive risks, doing your thing and ignoring your critics. All the very best.

Between Raila and Ruto, Who is On Purpose?